There are numerous applications for towed systems in a variety of fields including oceanography, geophysics/mapping, and acoustic monitoring. A basic simple towed system consists of a heavy (lead) underwater body pulling down particular payload. This is towed by a surface ship using an electro-mechanical or electro-optical mechanical tow cable, or even a plain tow line like Spectra. Pure clump weight sinkers are usually very heavy and are designed to sink, pulling down their on-board instrument, or system. That means they are cumbersome to handle on deck. The lump lead is expensive and toxic. They also have much more drag as the tow speed increases over 4 knots.

There are many advantages of using a free flooded V-Wing dihedral, over a dead-weight tow body for all your towed system needs.

First, the V-Wing Dihedral is lighter, and more efficient at using the downward force of the NACA shaped dihedral wings to pull the system down. This means the V-Wing is easier to handle, and since most dead-weights are constructed of pure lead or some other very heavy, dense material they tend to be heavy and expensive both to ship and to use.

Secondly: The V-Wings are much more adaptable and useful for different configurations of instruments and underwater devices. The dead-weight is designed for one instrument and can be difficult to Re-configure. Also, the Depressive force, of the V-Wing, increases as the tow speed increases, unlike the clump weight.

Finally: Our V-Wings have been tested at the David Taylor model tow tank. All the tow tests show stability at speeds from 1 knot up to 20 knots. The dihedral shape of the wing minimizes roll and yaw of the body. The tow tests also collected data on the depressive forces of each of our wings at speed. This data together with the use of the 3-Dimensional computer cable calculation program allows us to accurately predict the depth and distance astern as well as the cable tension at all tow speeds for our  Dartmouth Ocean Technologies dihedral Wing Bodies. 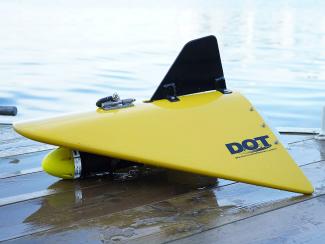